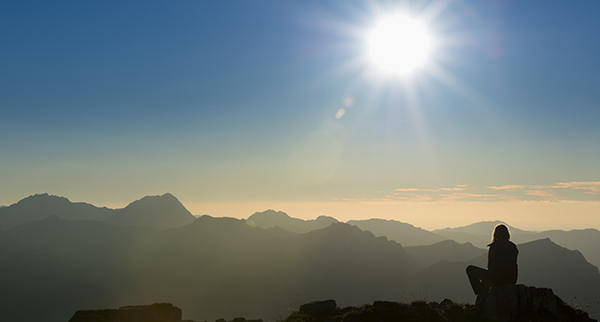 March is International Women’s History Month. This month, we’ll focus on four significant topics related to transformational leadership and the fierce feminine. These topics are certainly ones that you’ve heard before, but perhaps not always at the top of the list for leading well.  They’re so incredibly important. I hope you’ll take some time to consider them for your own transformational leadership journey. Here’s what you can expect in the next four weeks:

Looking forward to the conversations! Keep looking up!

Creating a Pause... Often, we think of leaders as fast-paced, movers and shakers. All true. And the greatest leaders pause with intention, slow down, take time out, reboot.

Last week, I went to Sedona, AZ, to pause. Sedona is a beautiful, magical place, infusing visual majesty that is almost more than the brain can take in. Red rock formations, often displaying shapes that are easy to identify like Snoopy, a coffee pot, or a camel, seem to show up in every moment. I have been to Sedona a couple of times before, always feeling an incredible sense of connection with self. It’s stunning to imagine that at one time, the tallest points in this place represented the bottom of the Pacific Ocean.

It feels like a significant amount of time since I have taken a pause. The last time was in June when I began my “healing tour” in Europe. Wouldn’t you think that I would’ve learned that the revolving door pace that I seem to continually create for myself would have shifted after being diagnosed with, battling, and winning the fight with Stage IV Lymphoma? Old habits are hard to break. Recently, I have found myself right back in the run of revolving. Can you relate?

Going on this trip, I was seeking. Seeking something. An answer … a direction … a call to my soul. I can’t describe it exactly. It was just a knowingness of a need so deep within me that I had to pause and answer.

We decided that we would create an adventure and experience the Healing Vortex Tour. Vortexes are areas of concentrated energy which rise from the earth, creating something like what happens in a whirlpool. The more literal description (by Merriam Webster) is a mass of fluid (such as a liquid) with a whirling or circular motion that tends to form a cavity or vacuum in the center of the circle, drawing towards this cavity or vacuum bodies subject to its action.

Our tour guide, Margaret, a very “Zen” woman, probably in her 70’s and dressed in the most colorful, patterned leggings I have ever seen, with bangles adorned on each wrist, called for us to lay down on the red dirt. She wanted us to breathe in the possibilities of this place.

Seriously?  In these black jeans and my UGG boots? Lay on red dirt?  Clearly, ZEN and/or connecting with the dirt is not a place I often find myself. But I chose to participate. Six rounds of chemo for five days at a time has proposed no residual effect in getting down. Getting up … a different story. I feared I might be connected to this red dirt for the duration of my life.

Margaret took us through a guided meditation as we lay on the ground. It was fascinating. When I stopped rolling my eyes, I did feel myself pause. Settle. Breathe more deeply. Following the meditation, Margaret took us to another area where she introduced the medicine wheel.

A circle in the dirt, outlined with large red rocks and an intersecting cross of rocks in the center, indicated to us quadrants representing north, south, east, and west with a powerful Source in the center. Margaret directed us to pick up two stones and told us to place them anywhere on the perimeter of the circle. I had a heart shaped rock in my pocket which I had collected as a souvenir from our last activity. My friend Tom, who was part of this adventure, believes I have object permanence. He believes I have a need to physically take something from an experience to fully remember it. Nah, I don’t think so.

I wandered off to find the next stone. This seemed to irritate Margaret. She told me there would be “no wandering,” and that I was overthinking the exercise. Interesting. And consistent. Overthinking can be an issue for me.

When I finally found the right stone, I struggled to find the “exact right” spot in the circle where it should be placed. Again, Margaret was irritated. There IS no exact right place. Margaret’s belief is that the universe will direct you if you are brave enough to “let go.”  We were then to walk without ceasing inside the circle. Let me just say now that I never heard her say the words “without ceasing.” While we walked, we were to ask our hearts this question, “How am I living my life?”

The medicine circle was in partial shade, but at the southern opening, the sun allowed a warmth and peace that demanded that I stop and be present in it.

She told us that the placement of our stones indicated stages/phases of our lives…where we are in the moment. Then she went on to explain what that meant for each of us. It was eerily accurate.

Here’s what I learned:

Where are the places that you pause with intention? Slow down? Take time out? Reboot?

I will carry the experience of the Sedona pause with me until the next time. And I will recall the experience clearly … when I look at the heart shaped rock on my desk!